In the second post in this series of empowered births we will hear about the birth of Aria. Her parents, Nidhi and Andrew, are a lovely couple that clearly loved each other and their daughter. Talking with Nidhi through her 3rd trimester made me confident that she was well informed and quite capable of making excellent decisions for herself and her baby. When her OBs started to talk about changing her plans I simply reminded her of her options and then cheered as she stood up for herself multiple times to have the birth that she knew she and her daughter needed while making sure that her daughter was healthy and safe. As you read her story keep in mind that Nidhi’s estimated due date was around Christmas time which is a common time for interventions to be suggested by OBs to reduce the chances of having to spend their time in the hospital on a holiday.

“I am going to burst from the inside out, I cannot take this, I need a C-section” – I screamed a few minutes before I started pushing.

Melissa has probably  heard different versions of this so many times now that it is probably a matter of when, not if it will happen. She knows how close to giving birth a laboring woman is when she says something similar. She knows that and a whole lot more.  All she said calmly to me was –“ No you are not, I have never see that happen”.   As strange as it sounds, I miss that now. And it wasn’t just because within the next hour I was looking at the most precious thing my eyes had ever seen. The other big reason was the fact that I felt like a human being with autonomy over my own body after all was said and done, despite multiple attempts by the doctor to  push unnecessary interventions on me during and in the few weeks preceding labor and delivery.

At my 37 week appointment, the doctor found that the fundal height was a little below what they expect and ordered an ultrasound. Everything looked  great and she said there was no reason to be concerned. At 38 weeks , fundal height was still a little below what they consider normal for this stage, got an ultrasound right away and everything looked great again. However, the doctor suggested that the baby wasn’t going to gain much from staying in from here on out and since I was measuring on the smaller side, he scheduled an induction for December 17th  which was 2 days before “ estimated” due date. Note the quotes around the word estimated. I leave the doctors’ office somewhat confused but ok with it because its probably best for the baby. My husband, mom (was visiting to help with the baby) and I talk more about it after we leave and I realize I am not really convinced.

At this point I have been checked for dilation twice with no signs of it. I am not even sure why they were expecting it. Will I get a cervical check in the last few weeks if I ever have a second baby? The answer is a clear no. I didn’t really want it this time either but it being my first time, I was hesitant to say no to certain things. I had done my research- a whole lot of research but I still didn’t say no to certain things or change my practice in these last few weeks because I didn’t have enough self-confidence. I knew what I wanted but a voice in the back of my head would always tell me that no matter how much research I have done, I haven’t ever been through this and I am probably overthinking it. That was a mistake. Fortunately for me, it didn’t cost me anything. Will I go through with things I don’t believe I need or am not comfortable with if I am pregnant again? Absolutely not. But I should have been certain of this during my first pregnancy as well and that is what I tell anyone that asks me if there was anything I would have done different.

Back to the scheduled induction. I tell Melissa about it. She asks me how I feel about it. After she realizes I am not completely sold and sound somewhat confused, she suggested I may want to get a second opinion if I feel like it. I call back my doctor to get a second opinion from another doctor on their team. Any guesses on what the other doctor had to say?  He agreed with the first doctor. Maybe he truly felt that was the right thing to do or maybe he didn’t want to contradict his colleague. Its anybody’s guess. My insurance doesn’t require me to have a referral to see a specialist but guess what, the specialists won’t take me in without a referral from my doctor.  Do I want to go see my doctor to get a referral to see a maternal fetal specialist? Not really.  Melissa helps me get an appointment with a well-known MFM specialist in Atlanta. They do an ultrasound and a non-stress test. The doctor spends a while explaining all the growth percentile charts and how everything is growing proportionally even if the baby is on the smaller side. He simply tells me that normal babies come in all sizes and that the ultrasound and non-stress test show no signs of a need for any intervention at this point but that I should do what I feel comfortable with. I decide to call the hospital and decline the induction.

On December 17th, I go back to my doctor on the day of my originally scheduled induction. I am seeing a 3rd doctor this time and  she says everything looks good.  I go back on December 21st, 2 days past estimated due date and an induction is scheduled for December 27th. Because of the events of the last few weeks, I agree to it even though I think I would have probably gone into labor on my own if we had waited a few more days. I spend the next 6 days hoping to go into labor on my own.

Fast forward to induction day – Pitocin started at 7:18 am. I am not dilated at all and at the highest possible station for baby. The doctor comes in around 7:30 and says we should probably break my water so things can progress faster.

The doctor comes in 2 additional times before 10:30 and suggests breaking my water each time. Each time his demeanor is less friendly than the last and he looks a little frustrated. His reasoning was that it would speed things up. Until around 9am, I had not felt anything. From 9 to 10:30, I had mild contractions- a lot like period cramps. He failed to give me a good answer for why he thought we need to speed things up. The baby was doing great, I was in no pain and the Pitocin was starting to do its job. I tell him I have no desire to speed things up. He also says that he knows I have a Doula or “whatever” coming.

Between 7:30 and 10:30 I am measured twice. They tell me I have made some progress – 3 cms or so. Melissa comes around then. I had been having mild contractions at this point which I was able to manage by myself while lying in bed, as she had suggested. Around 11:30 contractions start getting serious to the point where I am now needing help with each one. Melissa is like a mom getting things done – physically working on me to help relieve the pain, encouraging me use the restroom very frequently(which had become extremely difficult after a point) , making me do these exercises which involved techniques that help move the baby along. It  worked wonders . Before she started the exercises I had been measured and had not made much progress as far as dilation goes even though contractions had become quite powerful. I was getting a little disheartened at this point and the doctor suggests breaking my water a 4th time. I considered it this time.  Melissa explained the pros and cons to me. After the doctor left, even the nurse chimed in with why I probably shouldn’t do it at this point. I ended up not having my water broken. It was only towards the very end that the doctor himself suggested against it because I was very close. In hindsight, I should have known that this would go this way based on my interactions with the doctors during my prenatal visits. I remember the time I was first asked about pain management and I had said no intervention – the doctor questioned my choice, was almost sarcastic , told me I didn’t know what I was going to be dealing with. All she should have done was support my choice and tell me I had options for pain management if I needed them.

All along my labor, I had to deal with fighting for myself because the doctor and I were not on the same page. This is something a laboring woman shouldn’t have to go through in addition to going through labor itself.  Being induced at 38 weeks or breaking the water 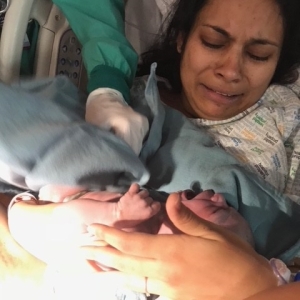 early in labor may have been the right choices for someone but they weren’t for me and I knew that during my pregnancy. The lesson I learned from my experience was that I should not have been shy about changing my doctor midway through my pregnancy when I started realizing that we were not on the same page. I should have also asked more questions before  making my initial selection. A lot of women have had a great experience with the same set of doctors, so it really isn’t that the doctors aren’t good. It is just that my goals did not align very well with their philosophy. To me, having an unmediated birth was of utmost importance and it wasn’t that high on their list even after knowing that was what I wanted and had prepared myself for it as much as I could. I won’t and don’t need to go into the reasons here but I believed it was best for both the baby and me to go through it without any unnecessary interventions. None of the reasons involved wanting to earn bragging rights.

In the end, my labor and birth did go per my plan and I was ecstatic about it but I could have had a better experience if I had doctors that were more supportive of my choices. In that case, even if it hadn’t gone as planned because there is only so much one can plan for when it comes to giving birth, I would have still been as satisfied knowing that  my birthing team and I had done everything to try to make it happen.